“They may take our lives, but they’ll never take our freedom!”

Stand on the east bank of Old Stirling Bridge, looking across the stone gateway to the city with the castle perched high on the hill and you can imagine William Wallace addressing the troops as they prepared to fight the advancing English army back in 1297.  Wallace is still a revered character in Stirling, with a huge monument to him just a mile or so north of the city centre, which offers some outstanding views back to the city and the surrounding rolling hills.  You can reach the monument by bus 52 or UL from outside the main station every thirty minutes. If you fancy a bit more history then you can head south to Bannockburn where there is a visitor’s centre detailing the infamous battle.

Today the English get a more friendly welcome in Scotland’s 20th biggest city, seen as the “broach that binds the Highlands with the Lowlands”.  Just over 30 minutes from the centre of Glasgow and under an hour from Edinburgh, Stirling is a perfect addition to any trip north of the border.  Traditionally, this was the lowest bridging point on the Forth, which made it such a strategic point and a focus for military activity.

There’s plenty to keep you busy here for 24 hours – to get the best out of the city we’d recommend putting on your walking boots and starting at the main station.  Cross the footbridge just south of the station where you can grab some fantastic views of the surrounding hills and then head north along Forth Street, until you reach the river’s edge at Lover’s Walk. From here follow the river north and you will get to the Old Stirling Bridge where you can step back into the time of Wallace and the advancing English army.

From here it is quite a hike up Upper Bridge Street towards the castle but the views are certainly worth it.  At the top of Broad Street is where most of the action happens.  Here you will find the spooky Old Town Jail, the Church of the Holy Rude where the child king James VI was crowned and some fantastic views from the graveyard as well as Stirling Castle itself.

The walk back down is best saved for lunch time where you can pop into a few of the culinary highlights of the city.  The oldest pub in the city centre is the Nicky-Tams on Baker Street which serves some good home-cooked food and local ales, whilst just a few doors down in a branch of Brewdog which never fails to hit the spot.  Slap-bang next door to that is the Brea Restaurant which is highly recommended.

When the sun goes down then the locals come out, mixing with the students from the university and enjoying a decent range of pubs and bars.  The Cold Beer Company on Murray Street is worth a stop, whilst just up the road and opposite Brewdog is Number 2 Baker Street.

The Stirling Highland Hotel on Spittal Street and just a few hundred yards from the Holy Rude is one of the best addresses in town for the night, even closer is the Portcullis which is on Castle Wynd and has some charming rooms.  If you are looking for a more budget option then on the far side of the station you will find a Premier Inn, or a bit further down Forthbank Way near the football ground is the Holiday Inn Express.

Football you say?  Stirling Albion may not be playing Premiership football but it is a friendly place to visit with some excellent views of the surrounding hills.  It is a fair trek out of the city centre along Forthbank Way although there is a regular bus service from the train station.  Also on Forthbank Way is the new-ish Vue Cinema and a few more chain restaurants.  Also on this side of the railway is the interactive conservation space, The Engine Shed, which is worth a few hours of your time, especially for those with kids. 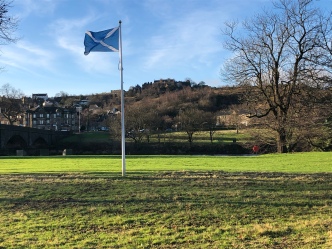