“Ah Glasgow” said the man on the bus from the car park at Stansted Airport when I told him where I was going, “Edinburgh’s ugly little sister”.  Harsh it seemed, although he then regaled me of tails growing up in Cumbernauld, itself voted the second worst place to live in the United Kingdom back in 2003.  On my last two visits, albeit for the Olympic and Commonwealth Games in 2012 and 2014 respectively, the city centre had been spruced up and even bus drivers had been known to stop to let passengers on.  Glasgow was back on the tourist map.

The city centre is one of the easiest to navigate in Europe, laid out on a rough grid pattern and bookend to the west by the monolithic cheap hotel chains that seem full with hen parties every weekend, gaggling all night long courtesy of whatever luminous WKD is on special offer at the off licences on Argyle Street, whilst to the east are the refined, Victorian Winter Gardens.  The city’s history has been shaped by the River Clyde that used to act as the barrier between the industry of the docks of Govan and Ibrox to the south, whilst the mercantile district north of the river completed the contrast between brawn and brains.

Today, it is the cultural capital of Scotland, home to many fine galleries such as the Kelvingrove Art Museum, located in a stunning building on Argyle Street and home to Monet’s, Renoir’s, Picasso’s and Dali’s galore, whilst the Burrell Collection has its home in Pollock Country Park to the south of the city.  The redeveloped areas north and south of the river around the old Govan dockyards is a sign of the prosperity in the city.  Here you will find the Glasgow Science Museum, a fine place for the family to spend a couple of hours interacting with each other in the strangest of ways and also home to the Glasgow Tower where you can get some of the best views in the city, whilst on the north bank of the Clyde you will find the Riverside Museum plus the iconic Finnieston Crane.

For those who love their football, and let’s be honest, who doesn’t then a trip to Hampden Park is a must for the excellent tour of the National Stadium plus a visit to the National Football Museum, a bargain £29 for both for a family of four. Of course there are also options to take in a game at Celtic Park or Ibrox (plus a host of smaller clubs including Partick Thistle, St Mirren, Motherwell and Hamilton Accies). For something completely different, how about paying your respects to Saint Valentine?  His remains, so they believe, are held in the church of Blessed St Johns Duns Scotus.

George Square is the heart of the city, whilst just down the street in front of the Gallery of Modern Art you will find the iconic Duke of Wellington statue complete with a traffic cone on his head.  The city centre is a shopper’s paradise with chain stores littering the likes of Sauchiehall and Buchanan Street’s, as well as big retail parks on almost every point of the compass outside the central area.

All this culture is bound to make you thirsty so try one of the following bars to quench your thirst.  The Meat Bar, which also offers unsurprisingly a wide array of treats for carnivores, in West Regent Street is a popular location as too is Blackfriars Bar in Bell Street which changes its beers as frequently as Lady Gaga changes her costumes in a concert.  On the River Kelvin, not far from the Botantic Gardens Inn Deep offers a riverside setting and some decent beers. Finally, it would be wrong not to pay homage to Brewdog in its country of origin so head across the road from the Kelvinbridge Art Gallery in Argyle Street for some excellent brews from home and away plus some decent food.

Talking of decent food, want to try the infamous Deep Fried Mars Bar? The Blue Lagoon Fish and Chip Shop can satisfy your cravings.  The scotch pie should also be tried whilst in the city, which is a mutton spiced pie with pepper and can be served with Bovril or brown sauce, especially at football matches and other outdoor events. Pubs often hand them out for free at half time for key football matches. For some this is still not enough and they eat it in a buttered white roll.  For the really hungry try the Glasgow Salad, which is basically a box that typically includes kebab meat, fried chicken, pizza, chicken tikka, onion rings, pakora, naan bread, garlic bread, coleslaw, chips other fast foods and sauces.

For those wanting to head slightly further afield for culture and culinary delights then the beauty of Loch Lomond is just thirty minutes away by car but a million miles away in terms of beauty and serenity, whilst Stirling, home of William Wallace is the same distance away in a north-easterly direction.  Both well worthy of half a day of anyone’s time.

If you do end up staying the night then can I thoroughly recommend Malmaison in the quietish surrounds of West George Street where you can eat, drink and sleep in a former Greek Orthodox Church, whilst Citizen M continues to grab rave reviews for its approach to guest experience at their location in Renfrew Street.  If you like your toilet in the middle of your room, then this is the place to go. The budget chains such as Premier Inn, Travelodge and Holiday Inn Express can all also be found in central locations but expect to share with some raucous travellers at the weekend.

Glasgow is certainly a changed place.  The grittiness has been replaced by a polished finish, the chaos by order.  Well worth a weekend look in anyone’s book. 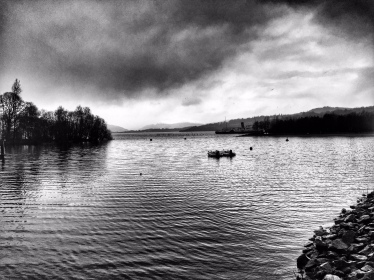