Welcome to one of the most densely populated pieces of land in the world, yet one that has one of the best qualities of life on the planet and where the centre of the “city” is characterised by green open spaces.  Singapore is unique in terms of destinations for the 24 hour people, offering enjoyment and entertainment at both ends of the moral spectrum.  From fine arts, luxury dining and jaw-dropping architecture to the legendary debauchery of Orchard Towers, there is something for everyone.

Few visitors spend more than a couple of days here, with the city being a perfect stopping off point between Europe and Australia but that’s plenty of time to get the most out of the city, and leaving you with a taste for more.  Planning is the key here to get the most of your trip.

Singapore delivers on so many fronts, whether it’s the ease and facilities of Changi Airport, voted the best in the world on 2013 where you can sip cocktails by the side of the pool in the transit area, the entertainment city at Clarke Quay,  to the stunning infinity pool 52 stories up on the room of the Marina Bay Sands hotel.  Time to dispel a few myths.  You can chew gum, but, like littering, you can be find for spitting it out on the floor. You can be fined for not flushing the toilet. You can be caned in public for being a nuisance or shouting too loud.  You are allowed to look at “artistic” content on the Internet or in magazine but cannot share it.  The lowest ever temperature recorded in the city was a chilly 20 degrees centigrade back in 1930.

Singapore doesn’t have the museums of Madrid, the culture of Paris or the history of Rome.  It has ridden out the austerity of the global financial crisis, borne out of the stunning architecture of the central business district and the Marina Bay area.  At the top end you will need a second mortgage to wine and dine but that’s not the case across the city.  Alternatively, grab your sunscreen and walk the route of the second most famous F1 road circuit in the world, finishing with a sprint down the home straight where the grandstands lay empty 362 days a year.

First time visitors will undoubtedly head for the famous Raffles Hotel, once on the water’s edge but today sitting on the corner of the old city and the new developments. The Long Bar, on the second floor is still a Mecca for the visitor wanting to try a Singapore Sling for the first time.  The bar fills up at weekends, being a popular destination for raucous Hen groups from Australia and the Middle East – be warned if you fancy a sophisticated evening of quiet romance.  Talking of romance, some locals and taxi drivers may try to tempt you with a trip to Orchard Towers.  Located at the end of one if the best shopping streets in the city, Orchard Towers has the nickname of “Four floors of whores” and is the centre of the sinful side of the very strict state.  The building is a series of bars spread over four floors, which offers more risky temptations the higher you go. Watch your wallet and your conscience. A much more “family friendly” night spot is Clarke’s Quay where bars and restaurants try to tempt you in whilst the sounds from Tang’s Music Box on the first floor lure in would-be pop stars for their own private karaoke.

If shopping is your vice then you will be addicted in Singapore.  Shopping Malls open up almost every month in every corner of the city, offering big brands and local bargains.  Most of the biggest stores can be found on Orchard Road where shopping centres offer an air-conditioned respite to the often searing heat.  If it gets too hot, do what the locals do and buy an ice cream sandwich from one of the many street vendors. That’s a literal sandwich too – a block of ice cream in between a folded piece of coloured, sweet bread.  Trust me, it tastes ten times better than it sounds! An efficient metro system links the major shopping hubs such as Orchard Road, Marina Bay and Tanglin. Don’t expect many bargains though unless you are looking for electronics where haggling is still the norm with many independent retailers.

So where should you spend your time in “doing” Singapore? For one of the best views of the city take a trip on the Singapore Flyer, the highest observation wheel in the world at 165metres tall.  Admission starts from SG$33. Alternatively there are the ultra hip and cool bars with altitude rather than attitude at 1-Altitude, the world’s highest outdoor bar.  Expect to pay for the privilege of joining the beautiful people but the views will be worth it.  If you want to eat with your view then the Marina Bay Resort is a good option, although it may just break the bank.

Not only is Singapore Zoo rated one of the best and most ecologically friendly in the world, it offers a unique night-time perspective with its popular night safaris.  It’s a fair trek out of the centre but most hotels will be able to arrange a visit for you, alternatively you can catch the MRT Choa Chu Kang and get a connecting bus.  Admission to the night safari is SG$42 for Adults and SG$28 or you can get their earlier and do two of the parks for $67.  The wander around the jungle with the sound of rustling in the bushes isn’t for everyone but the opportunity to see some of the biggest and fiercest beasts at their most active is well worth it.

In the summer there is nothing better than sitting in the shade and watching a game of cricket at the Singapore Cricket Ground in the shadows of the Financial District and Raffles City then hopping on a boat to cruise that traces the journey made by Sir Stanley Raffles around the syscrapers of the Central Business District. Want to see the world’s largest fountain?  Well that would be the 14metre high Fountain of Wealth, where office workers sit on its edge to cool off in the midday heat.

There’s little point in recommending good restaurants and bars as new ones open literally every week.  Many visitors will want to head to the Long Room in Raffles although for a decent steak it is worth ducking into the restaurant next door, even if the “truffle-infused french fries” look suspiciously like McCain crinkle cut frozen chips. Two exceptions to this are Jumbo Seafood on the Riverwalk with the spiciest of spiced chilli crab and Asia Grand Restaurant opposite Raffles Hotel where you can dine like the Chinese on chicken feet, shreaded pigs stomach and cold, jellied pigs trotters.  When in Rome and all that.

Hotels are pricey at every time of the year but one great option is the Naumi Hotel on Seah Street, just behind Raffles Hotel, which offers a little slice of chic luxury complete with a rooftop pool (not in the Marina Bay I’m afraid), super rooms with Apple TV and charging points coming out of every orifice and very attentive service. 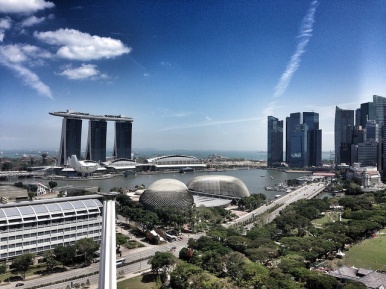 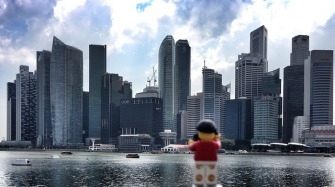