“Sydney’s like your pin up fantasy girlfriend” a work colleague told me,  Great looking, with world class assets you’d want to show off to your mates.  But Melbourne’s your childhood sweetheart you will always love, and will always love you when you make that walk of shame back late at night”

There’s a lot of truth in that.  Laid out very much in an American style, with a neat grin- pattern of roads that makes up the Central Business District (CBD), nothing is more than a 15 minute walk or 5 minute tram away.  The city has chosen to build up rather than out, meaning the streets heave during the working week but clear at the weekends when visitors and residents reclaim them, again giving the city a very North American skyline.  Architects are pushing the boundaries on a monthly basis here with some stunning designs, none more so in the reclaimed Docklands area, with the 55,000 Etihad Stadium as its focal point although James Squire’s Brewhouse runs it close – one of the best bars in the city to sit by the riverside and enjoy a local brew or two (of which there are many!).

The Yarra River is the lifeline of the city, offering an alternative method of transport to move from East to West and back again.  The Yarra runs right down to the ocean, passing the historic and picturesque Williamstown along the way – a lovely little spot for a weekend brunch.  The Customs House is certainly a spot for beer lovers with over a dozen Australian craft beers on draft and outside seating to soak up the sun.  Boats run from Southgate and Federation Square in the centre of town to Gem Pier every hour, costing AU$29 return.

Fancy a birds eye view of the city?  Head to Eureka Skydeck for some of the best views in the Southern Hemisphere (it being the tallest viewing platform too).  Not cheap at AU$19.95 but there is a small cafe at the top and you can wander around for ages.

Food lovers don’t have to wander far before they find something memorable in the city centre.  The younger crowds head to Chin Chin at the weekends where the off the wall menu and gritty decor have them queuing around the block into AC/DC Lane.  At busy times, films are beamed onto the ball of the building opposite to keep peoples minds off their rumbling tummy’s. Their stand-out signature dish is the Scud City Jungle Curry, made with some of the hottest chillies known to man.  They also have a number of hard-to-find draft beers. Just round the corner in Flinders Street is Press Club, which is owned by Australian Masterchef’s own George Calombaris.  Obviously don’t expect to just walk in off the street here and get a table.  If a snack is all you are after then you could do worse that heading down to Son of Burger at 546 Collins Street where two “sliders” and some outstanding egg plant fries will give you change from AU$15.

Two new additions from our last trip are the awesome MeatMaiden hidden underground with an unassuming entrance in 195 Little Collins Street – outstanding pulled pork (Texas style with burnt ends outstanding) and a beer list as long as your arm, as well as Cookie which is a fusion of East meets West and has dishes that come in three different sizes depending on how hungry you are, plus of course a superb beer list.

There are literally dozens of great bars and restaurants on the south bank of the Yarra from Crown Point all the way down to Princess Bridge.  Some excellent spots to soak up the sun and watch the street musicians, magicians and mime artists perform at the weekends. Bear Base at the entrance of the Southgate Shopping Centre has a fine selection of local brews, although expect to pay prices that would make your eyes water in London.  To get back into the American feel, climb the four flights of steps of the Waterside Hotel on 508 Flinders Street to the Deck, one of the trendiest bars in the city with some awesome views, great beers and live music.

So you are fed and watered, what next?  Well for a birds eye view of the city, head to Eureka Skydeck which is 88 floors above the city and offers a unique experience in allowing you to walk out on a glass platform.  Not one for me!  Other must see attractions include the Australian Museum for Moving Image, located at Federation Square which showcases the history of TV and Movies. A few hundred metres to the west is the shark-filled Aquarium that is a great “rainy day” option (if there ever is such a think in the city).

Trams criss-cross the city and within the central zone (The CBD) they are now free which is a great gesture.  Climb on the historic circular tram to see the sights without having to stretch your legs, whilst taxis are cheap and plentiful.

Melbourne has one trump card over most cities in the world – sport. Victorians love their sport and have built shrines to their idols.  The South East corner of the city, just a ten minute walk eastwards along the river is dedicated to world-class sport with the 100,000 plus Melbourne Cricket Ground rubbing shoulders with the Rod Laver Arena, home of the Australian Open Tennis, the Westpac indoor arena and the more conventional 25,000 football stadium.  Football, cricket, tennis, basketball and the enthralling Aussie Rules all entertain tens of thousands every year, some events running concurrently.  The MCG is home to the Australian Museum of Sport, well worth a few hours of anyone’s time on a non-event day. 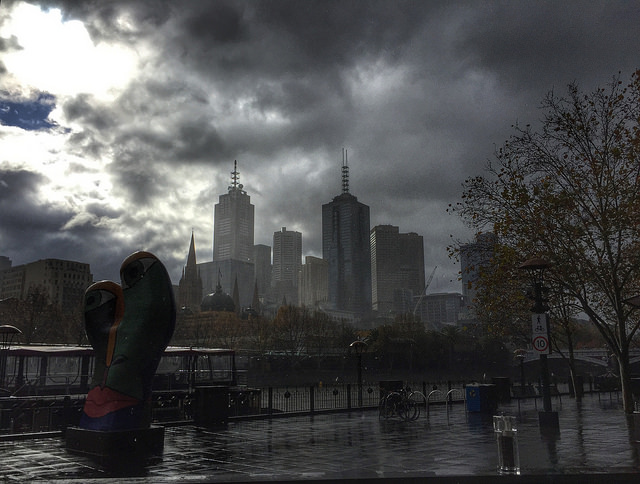